Well its that time of the month again, when we assess the results of the Marauders Teams.
We note

And so, as it can be seen the there are a number of candidates for the award this month. BUT given his team also won their league title this month, surely that should be the final dip at the line needed.
AND SO, the award for March Manager of the Month must go to Sir D…….
WAIT…
Is this a last minute veto from an anonymous committee member…..
‘If ****** thinks he getting manager of the month having got me up on Mother’s Day for this match, he’s got another thing coming!’

Oh well, I guess it will have to go to the vote at the managers meeting this Monday night, 7th April.
See you there folks. And non manager attendance rules you out of the vote! 🙂

The ‘And Finally’, pieces of news this month were 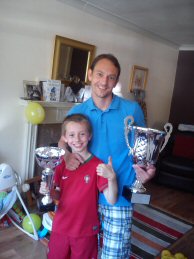 As we compile our results for the Marauders Manager of the Month for February, we note:

1) The Weather beat most teams but is not available for nomination.
2) Tony’s Bilbao’s continued their January success in early Feb.
3) The Eagles continued their 3 month unbeaten run.
4) As did the Ron’s Leopards, with their unbeaten run stretching from Xmas. (The Lightenings, also)
5) The Knights management actually gave their parent’s the odd Saturday off. Last heard of in 2010.
(Conveniently allowing their goalie to recover)
6) The Saints continued to challenge for the top of their league (in the top division) with another 2 wins, along with 2 or 3 in Jan. (The Saracens also)
7) 2 Club Derbies occurred (Jets v Giants) & (Vipers v Tigers)
8) And the Pumas, Phoenixes, Sharks & Dragons all continued their climb of the league tables

But with a semi final tournament appearance, 2 league wins and 1 draw (and getting 3 matches in at all this month!!!!!!) the award must go to the Panthers and their manager Sir Stuart Adams; Marauders Legend, excellent line painter & all round great blerk! 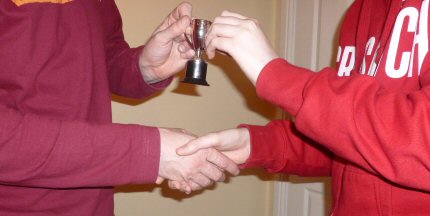 At Monday’s managers meeting we presented our first ever MMotM (Marauders Manager of the Month) Award for January. This is to recognize the team with the best results in January.
And without a shadow of doubt the awards committee, i.e. me, voted for the Bilbao’s and their manager Tony Edwards; who won 2 & drew 1 out of 3 games during the month. (And the draw was a comeback from 3-0 down at half time thanks to a rousing team talk from , , Dean’ son)

The picture above shows the presentation of the award. However, due to the cameraman having to zoom in to see the trophy, the faces of Tony, who is being presented by Chris Abbott, our legendary chairman, are obscured.

We now look forward to the awards for February and March to be presented at the next managers meeting in April.