The Panthers were formed in 2013, from a number of 6/7 year olds who were part of the Marauders Development training, the previous year. Managed by Stuart Adams, winner of the Craig Howarth Memorial Trophy for ‘Marauder of the Year’ 2013, and aided by Paul Jones, they currently play in the North Bury Junior Football League 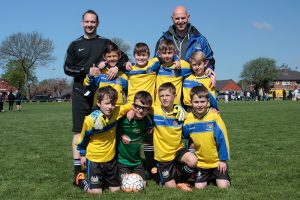