You are here: Home / Teams / Pumas

The Pumas were formed in 2015, from the some of the Under 6 development training class of 2014/2015. They are managed by the Paul Sanderson and Neil Wilson, and currently play in the North Bury Junior Football League.

The Pumas are proud to be sponsored by 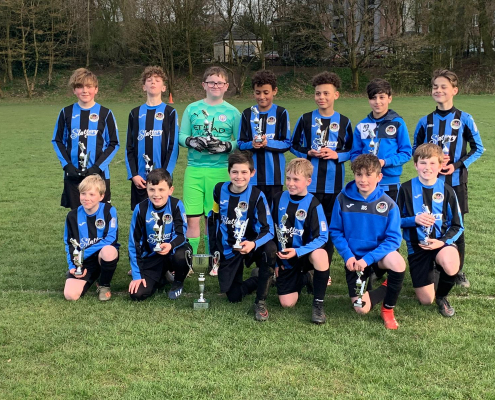 (Thanks to our groundsman for the excellent report)

I didn’t worry to look at the League table ahead of this one, the maths was simple, win the game, win the league. And we knew only two things about the oppo, unbeaten in the league this season, and they beat Premiership side Walshaw 3-1 just before Christmas, who we drew 2-2 with last week. This one had Cup final written all over it. And that’s how it played out, nervy, passionate, intense, two cracking sides toe to toe intent on taking top spot. Hoops had the better of the early exchanges, finding more passes, moving the ball better, and creating a handful of half chances,  but nothing really more than that and certainly nothing to threaten another excellent performance from Bobz between the sticks. Pumas looked nervous, and when they did try and play, the Hoops midfield, led by the impressive no.8, pressed hard for possession, forcing errors. But we know the threat Pumas pose, it’s only a matter of the right pass and they’re away. Joseph first to show down the right, just not able to deliver for the busy Rasan. Dayne settling on the left, a bit more ball and opportunity to run at the full back. And then the breakthrough, right side, Joseph to Rasan, this time getting the better of the centre half, nipping at his heels, cooly laying off for Matty 10 yards from goal, stepped inside, unstoppable. One nil. Nothing really changed, Pumas maybe settling a little, and certainly now well engaged in the physical battle, Josh, everywhere in the middle, trying to bring the ball down and play, under pressure in possession and not allowing Hoops an inch when they had the ball. Five minutes passed. Dayne received the ball from Josh on halfway, shaping to find Rasan, the defenders sensing the same, backed off, still backing off, 20+ yards from goal, not enough pressure on the ball and Dayne let one fly, keeper no chance, low and fading into the far corner, a scorcher, a brilliant goal, and a two goal buffer for Pumas. Again the game didn’t seem to change, intense midfield battles, both centre halves being worked extremely hard by the forwards, and both centre halves winning most of the battles, Captain James in particular growing in stature as the minutes passed, leading by example, and being supported well by Frazer keeping the lively no10 left winger quiet. A slight lapse in concentration gifted Hoops hope just before the break, arguably deserved after all their first half endeavour. 2-1. And so the battle continued second half. All the boys fully committed, Matty now fully fired up in the middle, connecting up well with Dayne and Rasan to create more chances as the game opened up a little. The Hoops keeper standing firm on the few occasions Pumas breached their defences. And then the chance to seal it, Matty running from deep, into the box, keeper to beat, a dreadful bobble and driving powerfully over the bar. The tension remained, the seconds ticked past. Alex now doing a great job keeping the no.10 at bay. Pumas on top, creating more, and the number of fouls and poorly timed tackles increasing, Rasan too hot to handle could only now be stopped by being brought down, taking some big hits for the team. All the boys immense across the 60 minutes, not the most attractive football match but sometimes its just about grinding out the result, and that’s exactly what Pumas did. Well done lads, great resolve, determination, desire and commitment – and worthy League winners, next stop the Premiership, can’t wait!! 👍🔵⚽️⚫️🏆

P.S. A note in this morning from the ref who commented on how good and respectful both sets of parents were last night. Good team effort all round 👌